skip to main | skip to sidebar

VM Ybor Home Tour OCTOBER 25th! This is a tour of our diverse, eclectic and historic community. featuring 9 gorgeous VM Ybor properties including a former convent, a historic "above ground" pool, and the infamous Charlie Wall House... This is a great opportunity to support your neighbors and your community while bringing positive attention to our urban area!

Self-guided tour starts on the corner of historic Columbus Drive and Avenida Republica de Cuba (14th Street). Buy a ticket, get a map and enjoy!

Advance Tickets ($10) are available at vmybor.org or get an "Advance Ticket Coupon" at La Segunda, King Corona Cigars or the FL Aquarium. Tickets are $15 on the day of the event - so reserve early!
Posted by kim headland at 4:36 PM No comments:

Press Release: With the recent rise in prostitution and illegal activities along the Nebraska Avenue Corridor, residents have begun an initiative to create a Nebraska Avenue Alliance to attack the problem head-on. The goal of the group will be to focus on the Quality of Life issues that affect the major North-South Corridor through our neighborhoods. The Alliance held their first meeting to discuss issues that affect the entire corridor which runs from Downtown Tampa to the county line. Residents representing each neighborhood bound by the corridor, were invited to participate. In addition to each neighborhood being represented, the group has also enlisted legal counsel to assist with researching various laws and Florida Statutes. “Until now, efforts have been limited to a specific neighborhood or small stretch of the Nebraska Corridor” says Stan Lasater, a Seminole Heights resident. “When one neighborhood becomes active in attacking the problem, we seem to push the problem onto someone else.”

While many call prostitution a victimless crime, those along the Nebraska Avenue Corridor know that the effects of prostitution have a lasting negative impact on our neighborhoods. After residents were told by TPD leaders that "our hands are tied" and "our plan is to continue making arrests. The problem is we have not been consistent,” neighbors felt the need to take action. Neighbors feel that our city officials have no plan or long term vision to improve the issues that affect the Nebraska Avenue Corridor.

The Group will focus on issues such as:

How businesses can play a vital role in decreasing prostitution
Local and state laws (i.e. mapping, precursors to prostitution)
Comparing cities and cases across the nation with Tampa
Working with major media outlets to publish names of prostitution related arrests
Long term treatment programs
Community policing
Tampa Police arrest procedures
Working with Code Enforcement along the corridor
Working with TECO to increase corridor lighting
Identifying various grants that may assist with the clean up efforts
Establishing a no-prostitution zone with harsher penalties
Working with the Judicial System to institute a no leniency policy for 2nd time offenders

By creating the Nebraska Avenue Alliance, we are hopeful that we can address many of the problems in unison, thereby eliminating the environment that encourages the illegal activity.

WIN UP TO $450 IN PRIZES!
Kids Play Cutest Photo Contest
Send us your cutest photo of your child(ren) and you could win up to $450 in prizes and see your child(ren) on the next cover of UC Tampa!
OPPORTUNITIES N.O.K.
The "North of Kennedy" Business Boom
GREEN&EARTH
Home Detox
FOOD&DRINK
Downtown's The Tampa Club
PEOPLE&PLACES
Working Out At The Gem
ARTS&ENTERTAINMENT
The Fave 5ive
NEWS&RUMORS
What's Happening In Your Neighborhood?!

Is anyone interested in a VM Ybor Yard Sale - a designated Saturday / Sunday for a large neighborhood yard sale?? The more folks participating, the better the traffic to the yard sale. March 14 & 15th is the targeted date, from 7am to 2pm. We will take care of advertising in the Tribune, online, etc. - all you need to do is sell your goods in your front yard, on your porch, etc. and let us know you are participating.

Please comment on the blog or email Kim Headland if you are interested. Thanks!
Posted by kim headland at 10:38 AM 2 comments:

I've noticed a huge upswing in the crime in the north end of V.M. Ybor. I can't mention how important it is to call TPD District III (242-3800) when you see illegal activity. I want you all to know that emailing TPD, Chief Hogue, Mayor Iorio, and other key people has had an impact, but it hasn't lasted. If you have a few minutes to spare, please write to them. Demand more police. We need to end the time of apathy in our streets. Drug dealers should not be running the neighborhood - we should. Please keep me posted of your efforts so that I can follow up with TPD. Bad economy or not, TPD has a job to do.
Posted by kate at 7:03 PM 1 comment:

A couple new shops are taking route on Nebraska Avenue. Located just north of our area at Osbourne, they are a welcome addition to the neighborhood. One business sells pre-prepared lunch and dinner to take home, the other sells antiques. Read this article for more information. Hopefully new businesses will open up on our side of MLK.
Posted by kate at 6:58 PM No comments:

Looks like we don't have to fight anymore as the Mayor has put her foot down. Read this article from the Times.
Posted by kate at 6:21 PM No comments:

Say NO to Digital Billboards

Neighborhood leaders across the city are asking for your help to ask/demand that City Council reject a measure to allow digital billboards in our city. The measure will allow a swap of digital billboards for regular billboards. There is a lot of fine print, but basically, it will allow for hundreds of these eyesores to show up all over town, and in many cases, impacting residences. City Council will vote on this March 5th. Please attend and voice your concern. If you cannnot be there, contact the city council members. Currently the measure is on the fence as some council say yes, and some no. Send emails to tampacitycouncil@tampagov.net. If you would like more information, let me know and I may be able to steer you in the right direction. Please, this is a very important issue for all of Tampa.
Posted by kate at 10:24 PM 1 comment:

Sunday, March 1st, is the Gasparilla Marathon. Race organizers are looking to increase support for the runners by simply cheering on Bayshore. The 4,000 runners will be on the Bayshore leg of the race between 8 - 11 AM. Chances are that you know someone who will participate in the race, so be sure to give this growing event your support.

Paint Your Heart Out Tampa

The PYHOT organization and the City of Tampa are looking for homes to paint.  They've opened up the eligibility of to include seniors, single parents, and disabled low-income homeowners. This is a great opportunity to provide relief to some of our neighbors.  The staff and volunteers of PYHOT will get approval from the homeowners; all you have to do is submit their addresses. Call 813. 258.4512.
Posted by kate at 12:23 PM No comments:

The City of Tampa wants everyone to remember the tighter water restrictions. The Water Police are out looking for you! Need some tips to save water? Read this.

Tampa Water Department is also asking residents to cut back watering their lawns.
Posted by kate at 5:23 PM 1 comment:

I attended an information session about the plans for HART's new BRT. The first bus route to take effect will run from downtown, north/south on Nebraska Ave, and east/west on Fletcher Ave to I-75. Fortunately, it runs straight through our neighborhood. Another great aspect is the creation of much needed bus shelters. Proposed locations for the stops/shelters in V.M. Ybor are at Columbus, 21st Ave, and just outside, Lake Ave. Operations are planned to begin April 2011.
Posted by kate at 5:16 PM No comments:

I would like all of you to know that on Monday, February 9th, a team of people from Code Enforcement will be performing a thorough look at our neighborhood. It includes officers from other areas as well as our own, and also those up the chain of command.

We are hoping that this attention gets the ball moving to rid us of unnecessary problems. Thanks to Pete Johnson for pushing so hard for this to happen.
Posted by kate at 4:59 PM No comments: 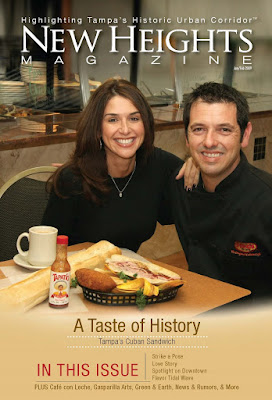 Heights Heighlights: A Taste of Tampa -and- Devilishly Delicious

News & Rumors: Hear it through the Grapevine. 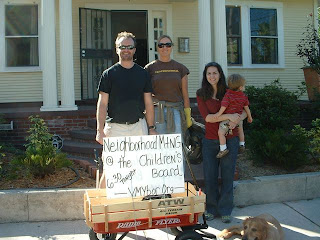 On Saturday, January 10th, the V.M. Ybor Neighborhood Association held its first neighborhood clean up. Five of us picked up trash on Nebraksa Ave and Columbus Drive, as well as many residential blocks. We received a very encouraging response from the public and hopefully recruited more people to help in the future. We also took note of multiple code violations. Thanks to Kim & Richard Headland, Barbara Robinson, and Pete Johnson for their help!
Posted by kate at 7:20 PM 1 comment:

Just the other day, our neighborhood activist friend Pete Johnson, stirred up some city officials about the number of code violations within our boundaries. Since then, some of these officials have driven around here to witness the problems we face. Right now, as much as ever, is a key time to submit code violations. The more we inundate Code Enforcement with our concerns, the more the city will be pressured to change. Please keep up the pressure.
Posted by kate at 7:15 PM 2 comments: